Posted by Heather Harlow on Oct 28, 2015 in Book Insights

“You are in shock, and you need to get some rest,” he was saying, as she turned to look at him.

When she turned to face him to tell him she needed to stay at work, she looked into his eyes and forgot what she was going to say.  He was so close to her, and he was still slowly rubbing her back with his hand.  It felt so good, she didn’t want it to stop. And he was so close.  Her heart sped up a bit as she wondered what it would feel like to kiss him.  His lips looked so soft and inviting.  Her sleep deprivation had lowered her basic defenses.

She was leaning into him – or was he leaning into her?  She didn’t really care who was doing what when his lips met hers.  She was lost in the feel of his kiss – and in the magnetic force that seemed to be fogging her mind and overwhelming Christoph. 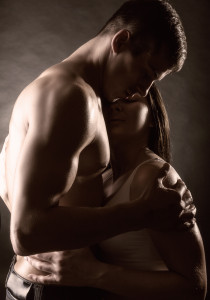 … he couldn’t resist her and he couldn’t resist just tweaking their energy movements just a little bit.   Unlike human men, who did this manipulation unconsciously and based purely on instinct, he was purposefully manipulating her.  It wasn’t hard when her lips felt so good.  He easily decided to probe deeper.  He opened his mouth slightly, and her lips followed suit.  He gently pushed his tongue into her mouth – again, she responded in kind.

When Christoph touched her tongue with his, she thought that her head was going to explode.  The chemistry between them was amazing, and she wanted more.  She wanted to feel him pressed against her.  She unknowingly moved closer so that her body was touching his.  At the same time, she encouraged him to pick up the pace of the kiss.  He responded, and kissed her back with an urgency that she couldn’t help but reciprocate.  She was intoxicated by him, and she pushed a little closer as she put her hands on his shoulders.