My Legs are Broken

Waking up, hanging from the seatbelt, she sees the inside of the plane is a mess.  Her back hurts terribly.  She reaches around to put her hand where it hurts.  She feels a huge lump in her back all the way across, about one inch wide and sticking out one inch and damn it hurts!  Oh crap, didn’t she need to get out of the plane? Don’t planes explode after an accident?  She quickly takes off her seatbelt and starts to maneuver herself out of the plane.  She steps on her left foot, “OUCH!”   She looks down and her ankle is unrecognizable; swollen to four times it’s size and blood everywhere.  ‘Oh shit, my back hurts, I need to lay down,’ she thinks to herself. 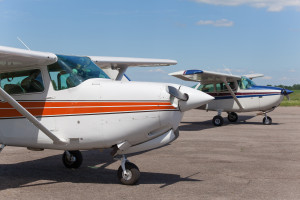 Finally, laying in the pine straw, hobbling distance from the plane, she wonders if she’s far enough away if it blows up.  She really didn’t care, her back hurt so badly and she certainly couldn’t walk anywhere.  She just wanted to sleep so she closes her eyes.

“Heatha!  Heatha!  Are you there, Heatha?” she hears the pilot calling her name in his thick Australian accent.  She reluctantly opens her eyes to respond even though she doesn’t see him anywhere.  “Yes,” she states as she thankfully closes her eyes again.

“Heatha, try to the radio to call for help?” the pilot requests.

Grudgingly, in terrible pain, she lifts herself up and limps back over to the plane.  Seeing the inside wiring of the plane because the dashboard is sticking out at least a foot, she thinks to herself, ‘there’s no damn way this radio is going to work.’  She struggles to reach the mic, keys it and multiple times tries calling for help.  “Mayday, mayday,” she repeats. There’s no answer.  “It doesn’t work,” she hollers back at him.

“Heatha, you need to go for help.” the pilot demands.

She thinks to herself, “Me, why me?” she automatically replies without even realizing it.  Her back was killing her and she just wanted to go back to sleep.  She didn’t even notice the blood on her face and arms.  She had no idea that both of her legs were practically solid bruises.  All she felt was the pain in her back.

The Australian pilot replies, “I cawn’t.  My legs are broken.”

Instant panic rises inside her.  ‘Are you kidding me?’ she thinks to herself before she kicks into auotpilot savior mode.