Rick Springfield was her very first concert, over 25 years ago when she as just a teenager. What a thrill it was to simply be next to the stage and be able to touch his shoe!  She remembered, she ruined her new sweater vest at that concert because it stretched so much from her being pushed up against the stage by the crowd.  But she didn’t care, she got to touch Rick Springfield’s SHOE!!!

Time had passed and she wasn’t a crazy mad teenager anymore.  Her and her friend bought expensive seats to the Rick Springfield concert at Chastain Park.  They had a table, so they took their own wine, cheese, crackers, and dip.  They even had a decanter for the wine.  It was all done with every Southern sophistication, but was more like playing tea party.  Who were they kidding, after each drinking a bottle of wine; they both felt just like teenagers; dancing and singing to all the songs. 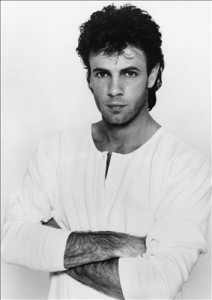 Their table was only the fourth table from the stage, so they had an excellent view.  The table closest to them, directly caddy corner to their table was empty.  There’d been some chairs on it, but they’d disappeared over the course of the opening acts.

Before she knew what was happening, Rick Springfield comes out into the audience and jumps up on the table next to them.  The wine had already gone to her head and she just thinks, ‘OMG, he’s right next to me, I have to touch him!’   Not even noticing that nobody else is approaching him while he’s standing on the table singing and playing his guitar.

She goes up behind him and puts her hands on his legs and runs her hands from his calves all the way up to his ass. ‘Holy shit, she thought, he works out, he’s hard as a rock!’  She did it again and again.  Finally, in her drunken state she decides she’s going to give back and she starts massaging his legs and his ass for him.  Up and down slowly she goes, pressing hard and giving him a truly excellent massage. He felt so good.

After about five minutes of this, she realizes that nobody is stopping her.  There is nobody else standing at this table that he’s on.  Only her.   She looks around and realizes that 60,000 people in Atlanta are watching her feel up Rick Springfield.  ‘Maybe she better stop she thinks to herself.’  He feels so good, she probably doesn’t have to stop, ‘where are the security guys anyway?’ she wonders.

Some embarrassment starts filtering thru the alcoholic haze.  She reluctantly stops and slinks back to her seat, which is next to him.  She swears he winks at her as he jumps off the table and goes further into the audience where, after her display touching him, the women were all over him but with respect.  Nobody tore his clothes off or destroyed his guitar.

She sighed, “Ah and at least she wasn’t the only one touching him,” as she acknowledged this was a step up and much better concert than her first because at this one instead of his shoe, she got to touch Rick Springfield’s ASS!!!   Are you kidding me?