After a night of drinking in Barcelona….

She woke up sick to her stomach.  ‘What in the world did she drink last night?’ she thought to herself.  More likely, ‘What didn’t she drink?’  The Scots kept buying rounds of shots, each one trying to “one up” the other.  Thank goodness after about 4 or 5 shots, she finally started saying no, including one time, she poured her shot into the potted plant next to her.  But right now, she just needed to puke again.

It wouldn’t stop, the puking.  She must have alcohol poisoning.  She needed to get to a hospital and get some fluids in her and that suppository or shot that makes you stop dry heaving.   There was no chance she was leaving town today so she called the front desk and extended her stay for one more night.  Luckily, after getting in a cab the doorman hailed, she found the hospital was across the street from the hotel.  What luck?!

The day before, at dinnertime, she met about twelve Scottish men in the Las Ramblas area on the metro.  She let them convince her to go out with them.  She’d be safe they promised.  There were twelve of them to protect her.

Since she’d already been in a British pub drinking Guiness for the last three hours, it didn’t take her long to accept their invitation.  She figured she might as well live it up.  She certainly wasn’t going to go out on her own and this would be fun.  Besides she was in Barcelona!

She went with the Scotts who’s first stop was for paella and sangrias.  The sangria she received was the size of a punch bowl!  She wasn’t sure how she would drink it all.  By the time everyone’s paella was gone, so was her sangria.  It was time to move to the next stop.

Their destination was a disco, rumored to be the best one in Barcelona.  Along the way, they stopped at several pubs for a few drinks, since they had almost two hours before they were supposed to meet their connection to get into the club.  Sure enough, two hours later, she was one of the first entrants into THE MOST POPULAR disco in Barcelona.  While she’d had fun partying with the Scots, the disco was becoming more and more crowded and conversation was impossible.  She’d never been is such a crush.  Now she knew what a “crush” is!  Little did she know this would all lead to a hospital visit the next day.

The hospital experience was nothing short of unbelievable.  She had to teach the nurses the words ‘puke,’ ‘throw up,’ and ‘vomit’.  While she was at it, she threw in ‘tossing your cookies’, ‘buying a Buick’, and ‘praying to the porcelain god’, just for her amusement.   Finally, they let her lay down and gave her a shot to stop the dry heaving.  Eventually, she was given fluids, but she barely received half the bag.  After more than most of the day in the emergency care being poked, prodded and x-rayed, they finally let her leave with a few prescriptions.

Back in her room, she ordered soup, crackers and bread for dinner.  Once she got the soup, she could barely eat a few spoonfuls before she heard a loud boom go off.  ‘What the hell, it sounded like a bomb!’ she thought.

She went to look out her window.  While she waited on room service earlier she’d seen a neighborhood band and mini-parade in the park directly below.  The band was gone when she looked down.  The area was seemingly deserted now.  Then she saw a light flash up through the air and boom, another loud bang.  The firework exploded in a bright flash of red sparkles. 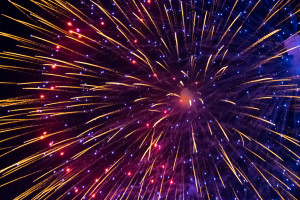 Another boom, and another.  The fireworks were exploding in front of her 24th floor hotel room window.  Seriously, the last one exploded nearly in her face, she swears the sparks hit the window.  She was so close to the fireworks, she almost couldn’t believe what she was seeing.  What a most amazing treat to end her stay and last night in Barcelona.  Are you kidding me?